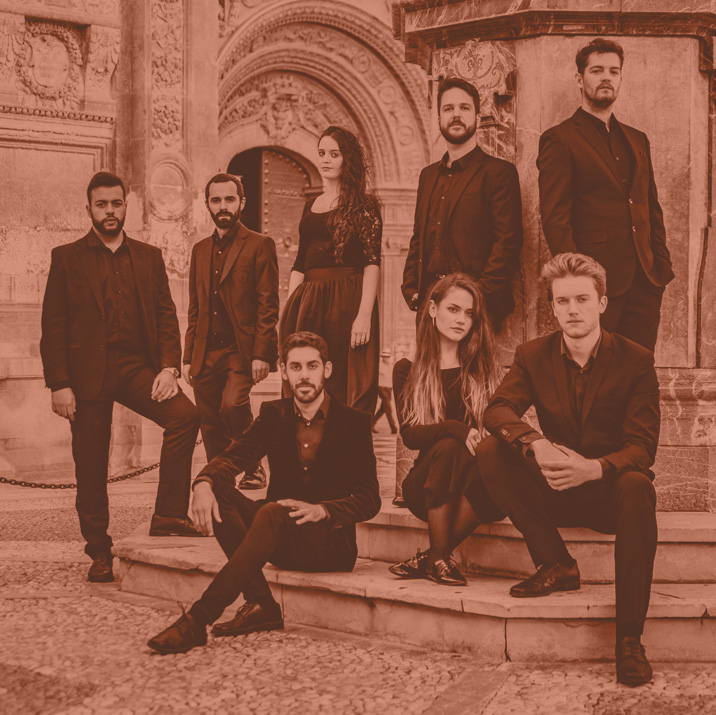 The Sierra Espuña’s Ensemble is formed by young professionals and ancient music studentes coming from different latitudes of the península. Their gather point is the Festival Internacional de Música Antigua de Sierra Espuña, and their headquarter is El Santuario de La Santa, in the village of Totana. This new ensemble is dedicated to the exploration of historicists performing techniques specializing in the music of Renaissance and Baroque. Carrying the name of the beautiful murcian area give them the same time both a solid empathy for the history of teir cities and villages and a vocation of showing the talent and improving the formation in an international level. One of their most remarkable activities are the FIMASE workshops, whose goal is to introduce to musicians of diverse formations the techniques of the performance historically informed.

In the edition of 2017th, this activity was focused on the polychoral Lutheran music, going deep into the music of Schütz, Praetorius and Schein. In the edition of 2018th, the work of this group was about a selection of works founded in the Archive of the Orihuela’s Cathedral as a result of a musical research by the researcher Antonio Pardo (Universidad de Murcia).

Thanks to the result of such collaboration and the Research and Innovation teamwork by Early Music Project, ECOS Ensemble has been able to carry out promotion programmes of the Hispanic music heritage, highlighting the recovering and premier in modern times of ‘Obras de Protocolo´ from Caravaca de la Cruz, released by researchers Ignacio López and Miguel Martínez, and the performance of two programmes with pieces kept in the archive of the Cathedral of Murcia (`Misa Capitana´ by Mateo Romero and `Misa Aeterna Christi Munera´ by Palestrina).

Currently, serveral researchers and musicians are working in a project of presentation and dissemination of the Manuscrito de Totana, founded in the Iglesia de Santiago “El Mayor” in the village of Totana.

Jorge Losana was born in Murcia in 1986. Graduated in Musical Education from the University of Murcia, and Graduated in Choral Conducting from the Higher Conservatory of Music of Murcia, where he also started his studies in Orchestral Conducting. Between 2013-2015, he specialized in historically informed performance in Barcelona doing his Master´s degree  in Early Music Performance from the Higher Conservatory of Music of Catalonia with Lambert Climent, a teacher of historical singing.

His training as conductor started when doing several courses in Choral, Orchestral,  and childen Choir Conducting with teachers such as Johan Djuick, Konrad von Abel, Martin Schmidt, Gabriel Baltés, Wilma ten Wolde or Vytautas Miškinis. Between 2007-2009 he audited classes of Choral conducting at Staatliche Höchschüle für Musik und dartstellende Kust in Mannheim (Germany) in Professor Georg Grün´s class. In 2005 he began his professional career as conductor with Schola Cantorum Alfonso X Èl Sabio´ of Murcia. He was also the conductor of the Cathedral of Murcia Choir and the Education College Choir of the University of Murcia, as well as other groups in Spain and Germany, such as the Morales Ensemble, InterkulturChor (Germersheim, Germany), and the Singsation vocal ensemble (Mannheim, Germany).

Losana founded Colorao Vocal Group, with which a big amount of choral work was offered between 2008-2013, characterized by the production of symphonic-choral programmes, the premier and performance of pieces by contemporary composers and the performance of music programmes from the Renaissance to the 20th century. In 2012, he took part as an assistant conductor in the choir created for the 30th aniversary of the `Orquesta de Jóvenes de la Región de Murcia´ to stage the 9th Symphony of L. van Beethoven, and often works with the Region of Murcia Symphonic Orchestra as Choral Conductor of collaborative projects organized by such entity with pieces like W. A. Mozart Requiem, `Lobgesang´ Symphony by Felix Mendelssohn or `Messiah´ by G. F. Händel.

As a singer, J. Losana is currently being trained as Tenor Leggero with the teacher Margarida Natividade in Barcelona, undergraduated in Classical and Contemporary Singing in ESMUC. He has participated in staging operas such as `L´Orfeo´ by C. Monteverdi, `Gli amori d´Apollo e di Dafne´ by F. Cavalli or `Le bourgeois gentilhomme´ by J. B. Lully. He has sung with several ensembles in Spain and abroad, for instance, the Caedmon Ensemble, Suspiratio Ensemble, Coro Nacional de Jóvenes de España, FECOREM Choir, Projecte Fonics of Barcelona, Kammerchor Saarbrücken, Kammerchor Mannheim or Ad Libitum Ensemble of Stuttgart. J. Losana has worked with conductors such as Pablo Heras-Casado, Georg Grün, Lluis Vilamajó, Xavier Díaz, Martín Steidler or Xavier Blanch, and has done choral singing courses with Harry Chrisophers, Björn Schmelzer, Mike Brewer or Néstor Andrenacci. He has attended vocal technique sessions and singing masterclasses with teachers such as Gerd Türk, Michel Boone, Bernhard Epstein, Sebastian Hübner or Carlos Mena.

J. Losana has worked in international records productions as a singer and conductor for record labels such as Deutsche Gramophon, Carus Verlag or Ronde au Production. Morever, he was one of the judges of the `Villa de Molina´ Carols Contest in 2012 and has taught several courses and workshops related to music and music teaching at the University of Murcia among others. Furthermore, He has collaborated with the media, for instance, Diario Cultural Digital `Nuvol´ in Barcelona or Onda Regional in Murcia.

Currently, J. Losana is in charge of conducting The Choir and the University of Murcia Orchestra, where he also teaches `Mención de Musicología´ within the Master´s Degree in Creative Therapies, organizes the University of Cartagena Cycle of Orchestras and Choirs and runs the International Academy of Historical Singing of Murcia. J. Losana is the director of both Sierra Espuña International Early Music Festival and Cantoría, a vocal ensemble specialized in early music performance which has been selected as emerging ensemble by the European programme `EEEmerging´.